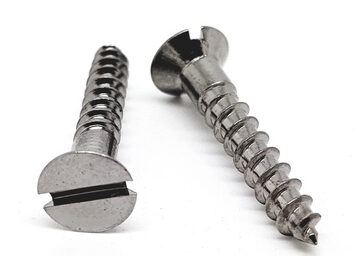 In the beginning of the 19th century, screws started to be mass-produced and usage became widespread. It wasn't until the end of the 19th century, that drives other than the slot drive could be easily machined on the screw head. By the beginning of the 20th century the Hex and Philips drive became popular. Finally there was no reason to use the vastly inferior slot drive anymore.

The slot drive slips easily. It can't handle much torque. It has extremely poor grip if the driver mismatches.  It deforms easily such that it becomes unusable almost instantly. It is virtually impossible to use safely with power tools. Regardless, people didn't really cease to use slot screws until the 1990s or so. And you can even still buy them today. Although they should have been outlawed a long time ago.

Can you imagine that manufacturers had modern plastics easily and readily available since the 1950?; but from 1950 to 2010 - for no reason at all - they would still choose to insulate electrical wires with cotton weave and natural latex rubber. So that common wires in houses and appliances can't handle much wear and tear, do short out more often and sometimes easily burn up in flames. Just like 200 years ago.

All damn right this would be considered a crime. A crime against people themselves. 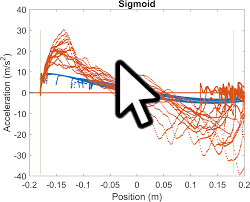 When drawing on a piece of paper, did you ever get bored of the fact that the pen draws exactly wherever your hand moves it to be?

Maybe it could be different, yes, it could be even better than this! Imagine, you moved your hand 10cm to the right. But the pen wouldn't always just move 10cm. It would instead move an near-unpredictable amount each time, which is determined by a logarithmic function with linear cutoff thresholds - mixed with other functions of mysterious polynomial qualities - that have half a dozen of input variables and totally change upside down if you switch the paper or pen or do things ever so slightly differently. You move it 10cm, it moves 5cm, or 6cm, or sometimes 9cm. Because it is better this way, more accurate. How you really desire it to be. You just don't know it yet.

Pointer acceleration will be the next big thing in VR camera control. It will as well be forever enabled as default.

I use cookies on my website to give you the most relevant experience by remembering your preferences and repeat visits. By clicking “I Understand & Accept All”, you consent to the use of ALL the cookies. You are thereby and hereby also made aware that this is my personal blog and that it has only been published exclusively for personal and family related purposes, in order to fully and ultimately comply with § 18 MStV. The fact that anybody can freely access and read this website without any technical restrictions in place, and I don't care if they do, does not preclude the fact that my blog is in no way shape or form addressed to the general public, but instead to my family and friends only. If you are neither friend nor family and feel addressed by the content, as if it was written to influence your thoughts and/or opinions (which my government does not approve of, and which is not the case), then please take note that there are bizarre laws in place that encourage you to wash your eyeballs thoroughly with soap and possibly consider psychological help.

This website uses cookies to improve your experience while you navigate through the website. Out of these, the cookies that are categorized as necessary are stored on your browser as they are essential for the working of basic functionalities of the website. We also use third-party cookies that help us analyze and understand how you use this website. These cookies will be stored in your browser only with your consent. You also have the option to opt-out of these cookies. But opting out of some of these cookies may affect your browsing experience.
Necessary Always Enabled
Necessary cookies are absolutely essential for the website to function properly. These cookies ensure basic functionalities and security features of the website, anonymously.
Functional
Functional cookies help to perform certain functionalities like sharing the content of the website on social media platforms, collect feedbacks, and other third-party features.
Performance
Performance cookies are used to understand and analyze the key performance indexes of the website which helps in delivering a better user experience for the visitors.
Analytics
Analytical cookies are used to understand how visitors interact with the website. These cookies help provide information on metrics the number of visitors, bounce rate, traffic source, etc.
Advertisement
Advertisement cookies are used to provide visitors with relevant ads and marketing campaigns. These cookies track visitors across websites and collect information to provide customized ads.
Others
Other uncategorized cookies are those that are being analyzed and have not been classified into a category as yet.
SAVE & ACCEPT